Note: idly flicking through some old notebooks, I found this journal from 2010 scribbled in the back of one of them. I have transcribed it here almost verbatim, with some insignificant tweaks for flow. Some of the spelling, especially the French, has been left deliberately unchecked. Square brackets are my notes written now, in 2017.

I should feel more excitement. I long for that. But it is unusual for the preemptive thrill before an adventure to be clouded by a lack of acceptance of the reality of its imminence. I can keep saying it, “in a few minutes you will begin a mad jolly around Europe”, but it refuses to mean anything. The words are too alien. Add to this a lack of company through which to amplify any latent enthusiasm.Add the weight of an afternoon so overcast that the world appears in twilight. That deep grey world, however, is not my home, it is London growing fast in the train window. It is my old home from not so long ago and it still holds much of my heart. I know it and as I write I am starting to feel it seep in. London is always grey yet burns like sulphur and soon I will be in its flame again. What a place to start a race!

[miles on our car’s odometer] (The George, London Bridge) 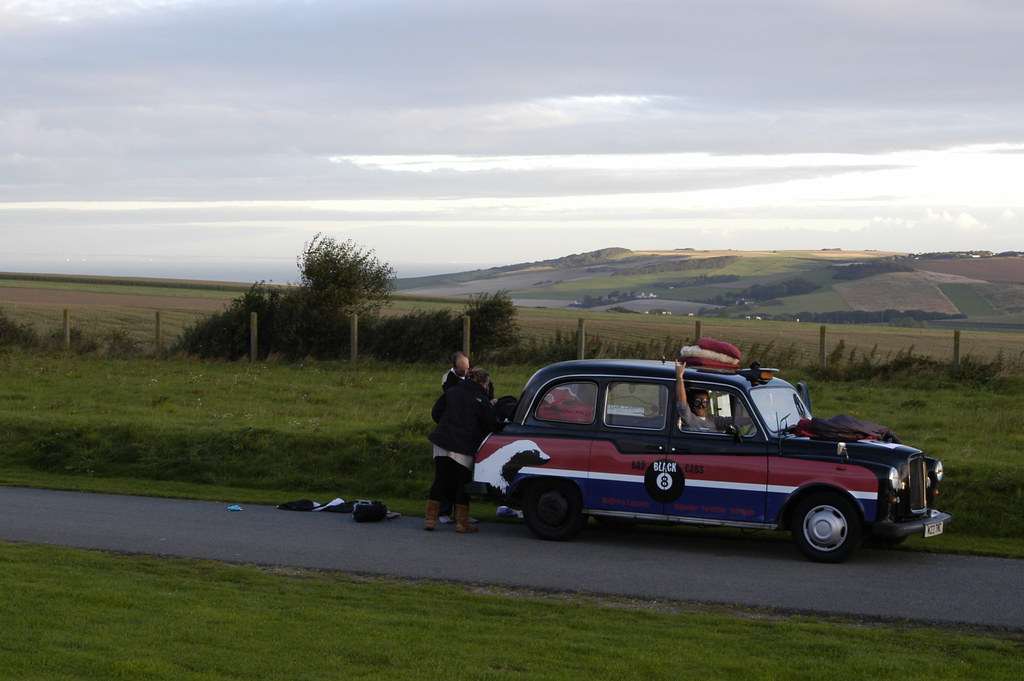 [written in wriggly scrawl] A side-note: it’s hard enough writing legibly on a train sometimes, an ancient diesel taxi is in another league again. This cab rolls baby.

In the first leg, through England, there were no novel sights so the excitement of the drive was borne from the fresh thrill of our new ride and hope for the days ahead. Now, some couple of hundred miles into the neck of France and creeping down over the chest, the flat landscape has little to offer us still. There is a kind of minimalist, stark beauty to the broad fields and their narrow range of tones but we’re not talking breathtaking. The exception was a short way back. The highway was unhedged and the surrounding fields unwooded. On the left, squatting in a spread of deep green crop, was a decaying pillbox, half-eaten by bushes and seemingly not far from returning to Earth. The still, dead structure, now the foundation of a living diorama, slid past with a captivating, if hard to capture, grace. Moments after it fell behind us, and while its weight was still on me, a brown sign approached bearing words along the lines of “La Batteille de Somme”. We were there, tearing on a fresh road through fertile land that once was ploughed by ammunition and boot-soles. It was hard to superimpose even the vaguest image of the battle over that landscape but to know it was there somehow raised the ghost of it.

Before lunch, for the run from Reims to Vitry Le Francois (Champagne country), I convinced myself of the benefit of a kip, as the rest of my crew already had themselves. It’s cosy on the floor of the cab, it’s surprising. I lay on the coarse grey carpet, the type designed for the blood and vomit of the drunken public. I piled a couple of cushions under my head, closed a zebra-print rug and a blindfold over my curled body and fell asleep smiling. Down there all is touch and sound; the shake and roar of the soaring cab blended with the voices of old familiar friends. 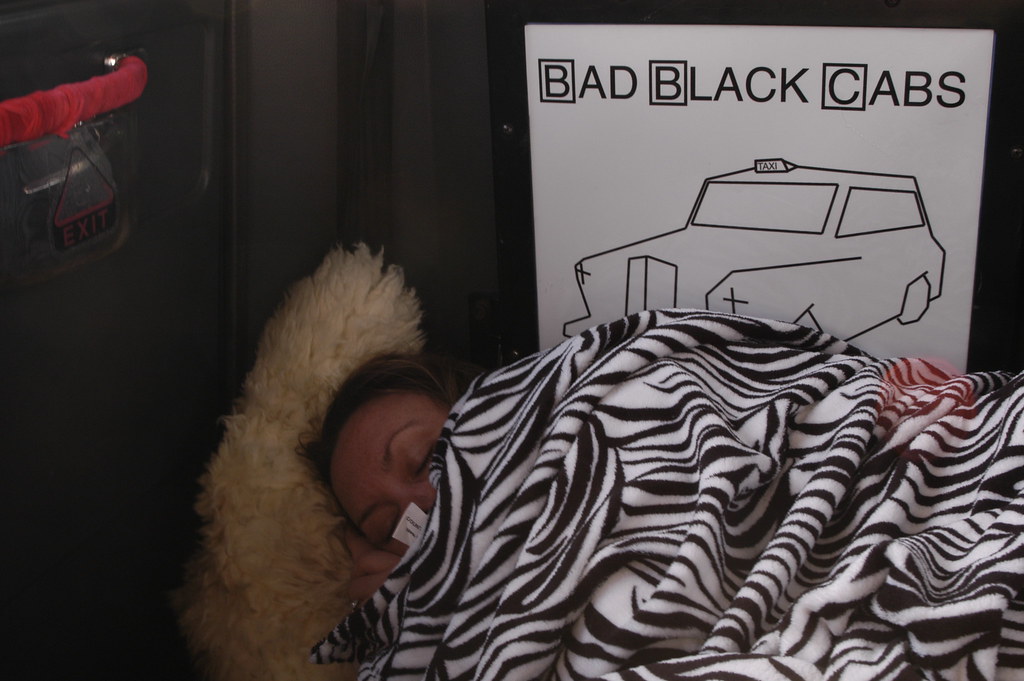 The pace quickened at lunch, at tables outside a brasseries in Vitry le Francois. The owner returned our accented French with colloquial English, in that cheeky presumptuous way that French people do. The brasserie fronted onto the town square, beneath gothic spires and momentary cloud-break. We asked for food and the owner laughed. “Let me see if the chef is still here…”

“…I can give you Entrecôte, you know, steak with chips and salad, okay?”

On the road we cracked open our own supply: vin rouge in a plastic cup, lapped in brief lunges as it sploshed about and made a go for our white crew T-shirts.

[the journal goes off the rails at this point and doesn’t bear transcribing. It dips back into legibility just before the end of the day…]

Time begins to contract at these points, jitters rise and the Danger creeps closer.

Then they mounted a bottle of Jack Daniels and a bottle of Smirnoff to optics on the inside of either door. That’s how it tends to go. 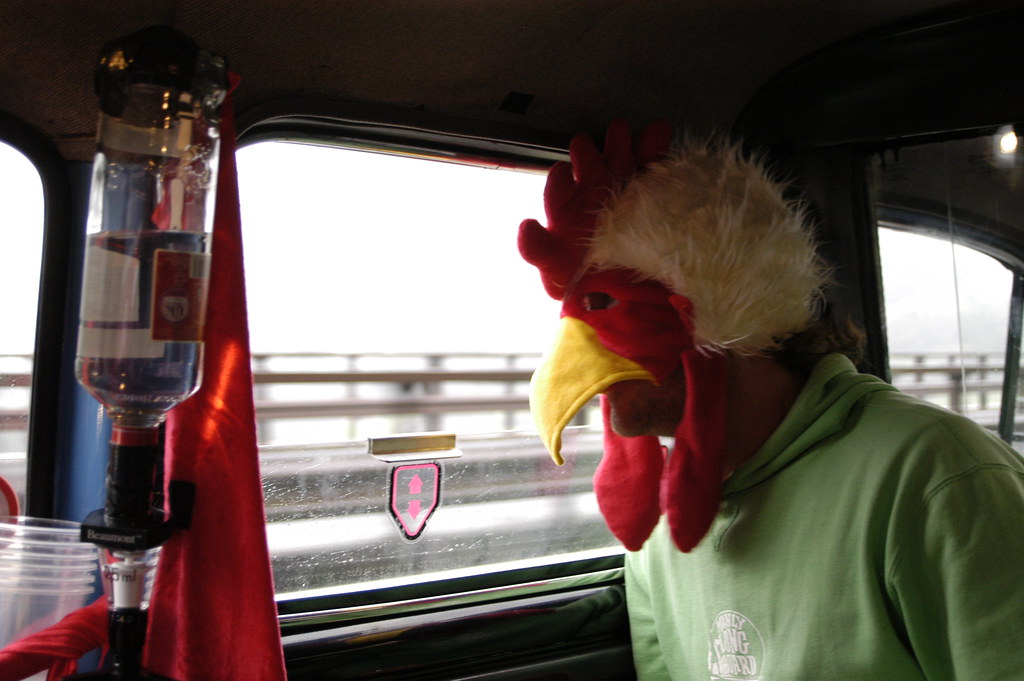 It went, alright it bloody went. Hard. And it was outstanding. Us three lads were in red, black and gold lamé cat-suits, Lucy chaperone in a vicar’s outfit. We invaded Dijon with an equal company of four other rally entrants, English lads in the three-piece black suits and bowler hats. But we found Dijon deserted. The bars were empty so it was looking like one of those lonesome holiday piss-ups. Fortune, however, favours the impulsive and the stupid. No doubt if that bar had provided any atmosphere we would have stayed for a few and tumbled down some other road but that brief calm revived our hungers so we bolted for a brasserie. We never made it.

In the street opposite the bar the growing crowd of Thursday-nighters mobbed us. Some would step in front of us, laugh and gesture at the sea of shining Lycra before them but walk away speechless. We were not an ordinary sight. A woop came from a first-floor window. The heads of two pretty ladies were protruding over the street and beaming at us. Jamie flicked the switch and, without pause or announcement, with the rest of our crowd reeling in amusement, made a break for the girls’ door. He tried some buttons and was answered by a buzz. All eight of us marched in.

[The journal stops here. I remember we ended up crashing a house-party, befriending the guests and eventually they blagged us into a local night-club – Le Chat Noir – by telling the bouncers that we were a gay wedding party. Two nights later we had ditched the rally and blagged our own way into the Augustiner-Bräu tent at the Munich beer festival, where we ended up getting spanked raw by a German biker gang. We stayed in the family home of a law professor from Innsbruck University, who had met Joe’s dad once.] [Then our final night found us sleeping in the cab in the red light district of Amsterdam, having driven all 512 miles of the way there exhausted, with rain sprinkling in through the gaps in the window-surrounds. The rest of the rally convoy had gone to Hamburg.] [Below are highlight notes that I wrote, each with a hand-drawn star as a bullet-point.]

Well, I never got to writing much, we were either fooling around or sleeping the whole time. A few notes on a few memorable incidents: 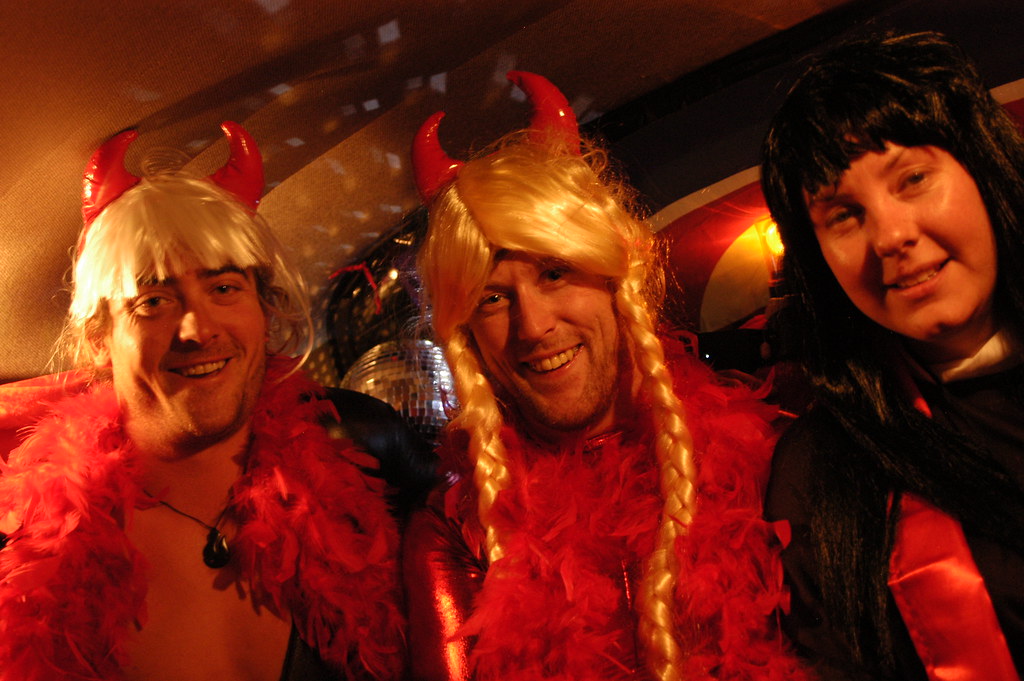 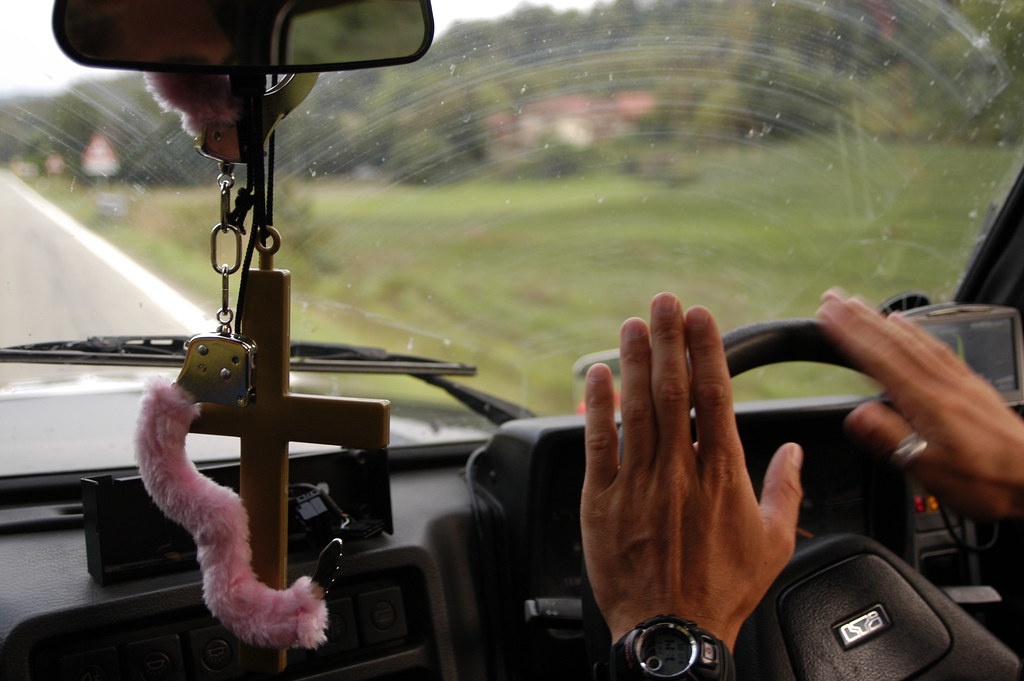 [Then the journal picks up one last time, when flying home alone the day after leaving my old friends in London.]

Take-off at Gatwick. The jets are squealing and the seat is shoving at my lower back. Our aircraft is staring at the late sun and challenging it to stop us from making it into the air. Now southern England is falling away and twisting slowly below, the trees, bushes, houses, even the livestock, are pronounced by September shadows. Now we are turning and I can see all the way to the south coast, see much of its broad sweep, and the carpet kink of the Downs in an otherwise flat southern landscape. Now we are pitching high over London and I have one of those rare views of my old town. I am naming the sights by the dozen, each one set out clear in this gifted light. My old town, laid so neat and still at such a height that every house is discernible but not a thing that moves, no people or vehicles to animate that resting beast of a city. Thank you England for such a farewell.

North of London the land was shut off by a vast plate of cloud, smooth and far below, leaving me with the sense that I had finally left my latest adventure, whole if battered. My sinuses are clogged and aching in the throes of a pummelled immune system, my body is a little tense and tousled but it, and the rest of what makes me, isn’t far from fine. Last night, finally delivered to my brother’s hospitality, I was a dumb-struck husk, at which Tom took amusement.

“I should take advantage of you in this state but I haven’t got the heart,” he said. We talked for maybe a couple of hours and then I slept for maybe eleven.

Those friends, Jamie, Joe and Lucy, and a few others beside them share a a potent desire to jostle past the safety barrier and venture out on the hunt for memories that will make us laugh in many years’ time. We are almost never disappointed. We almost never leave uninjured. We do not understand it and we are never satisfied with it. This is not a train that stops and delivers us to a new place, it just rolls on and for as long as we are not on it we long to be, in spite of how much it rattles and bruises. Of course there are limits, not real ones, for this is not a real thing, but they are necessitated by various factors and must be judgementally imposed. That’s not something I’m very good at.