Back to Civilisation in Granada, via Masaya & Apoyo

After the highlands of the north, we travelled south by bus to the city of Masaya. On the way we were struck by how uncultivated Nica was. Rather than crop-filled fields, we saw large areas of grass and trees. Everything was green. We passed fertile plains that were fringed by volcanoes, and sprinkled with colourful flowers. Cyclones of vultures, perhaps 100-strong, turned in the middle distance, gliding on some thermal, or over some dead animal.

We got ourselves set-up in a windowless room at the centre of a shitty guesthouse in Masaya. I woke on our first morning there with a cold, probably induced by the chilly, damp nights of the northern highlands. An illness that I would normally associate with winters at home felt incongruous with Nica’s hot climate.

A few miles from the city is the Masaya volcano. We were too cheap to pay for a guide so we walked up the volcano from the park entrance. A five-kilometre asphalt road leads to the summit. It was laid over an otherwise insurpassable field of volcanic rocks that were spewed over the area in an 18th Century eruption. As the road steadily climbed higher, my chest heaved and my nose ran constantly, ejecting webs of green mucus into the air. Maeve turned purple in the midday sun and her new trail shoes started to rub immediately. Somehow she had bought shoes that were a size too small. Soon she was blistered and hobbling.

The road finally ended at a parking area with a wall along the far side, built right on the edge of the active crater rim. A wide, blue column of gas was rising, in languid billows, from the crater floor hundreds of metres below, out of sight beneath several jagged ledges that surrounded the crater like Dante’s circles of hell. The whole scene, from a pious crucifix mounted on a peak to our right, across to the other side of the crater, was a palette of black, yellow and red, hazed by the blue, slightly sulphur-scented smoke. Every few minutes a low, crunching rumble emanated from somewhere deep below us. As we explored the twin peaks of the volcano, eagles, dragonflies and butteflies filled the gaseous air above, and lizards skittered under our sore feet. 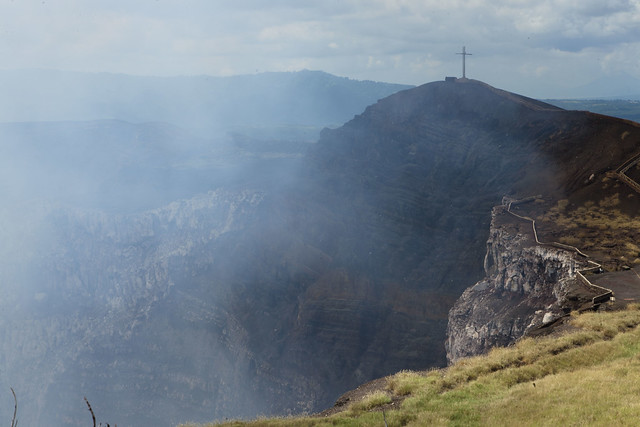 Attempting the descent down the road, Maeve was slowed to a feeble shuffle by her tight shoes. Halfway down, a park ranger approached in a pickup truck. He didn’t need any signal from us, he just stopped, smiled and gestured to the flatbed. For all the awkward discomfort of that hike, it was worth it for the joy on Maeve’s face as she sat against the back of the truck’s cab with the wind in her hair and the weight off her feet. 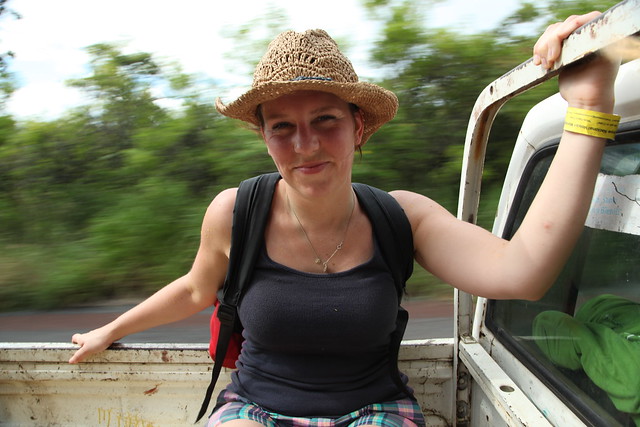 A quick bus ride from Masaya volcano got us to Apoyo, another, larger, extinct volcano. The Apoyo crater was lush with greenery and filled with a deep lake. From a small public section of beach between a couple of shack bars, we waded out into the perfectly cool, perfectly clear, still water of Laguna De Apoyo.

That night the rain came and went with typical abruptness but this time it fell with fresh fervour, leaving the streets of Masaya running like rivers. Cars waded across junctions. Pedestrians leapt from the pavements to avoid the deepest parts of the water. We splashed our way to a popular fritanga (street barbecue) and ate smokey chicken legs under an awning while we watched the cars glide by like boats as lightning flashed behind a plum-coloured sky.

Another luxuriously short journey the next day took us from Masaya to Granada, a key location on the tourist trail and our last stop before starting work at Buena Vista Surf Club. Granada is the postcard colonial city, built by the Spanish to demonstrate their cultural superiority before Central America had what we would recognise as cities today. It was similar to León, where we had been a few days earlier, but Granada is its clean-cut, well behaved sister. Its streets were lined with pastel walls and shuttered windows, all draped with tiled roofs and laid in a neat grid around a central square. On one side of the square is Granada’s icon, a gaudy yellow cathedral. And a couple of blocks away the city has a peaceful beachfront on Lake Nicaragua, where tourists dawdle past on bicycles and kayaks.

For us, Granada was a planned indulgence. We drank expensive coffee and ate big meals at tourist-oriented restaurants, aimlessly ambling through the streets. We hired bicycles to visit the lake, then rode them across town to the country’s main cemetery, where a sea of statues and crosses is overlooked by the green cone of the neighbouring volcano, Mombacho. A man in uniform approached us at the cemetery and started to tell us about the graves. We tried to ignore him politely but he kept talking. I had been feeling weak and demotivated from my cold, although my energy was just then starting to creep back into me. Wanting to get away from this man and back to the peace of our own company, we tried to figure-out what he wanted from us. He wanted nothing. He was the security guard for the cemetery, but made use of his days by giving free tours to visitors. Even when we insisted on paying him, after what became an informative and friendly tour, he happily refused. 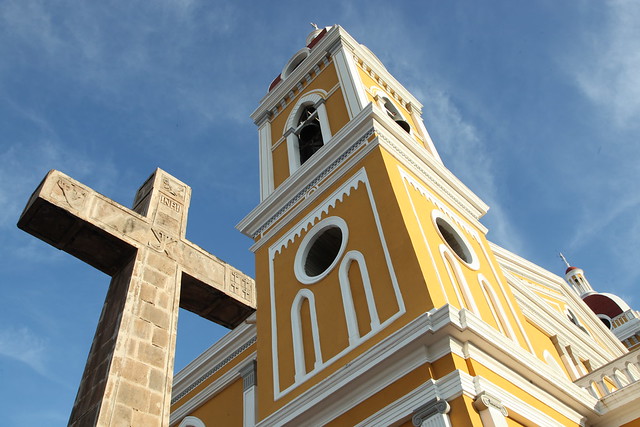 The main church in Granada

From the cemetery, a dirt road leads steadily uphill to a mariposario (butterfly park) in the woods out of town. Standing on the peddles, we wheezed and sweated our way in the sunshine. It wasn’t really worth the effort, the park had little to offer. But then, one of those easily forgotten little moments of magic occurred on the way back to town. I made an audio recording on my mobile so I would remember it. It reminded me that we had put our backpacks in the baskets on the fronts of our bikes and freewheeled all the way back to town. As we rattled down the track, the seat springs creaked and birds chattered around us. Roosters scratched at the dirt and dogs lazed in the sun. Kids playing with homemade yo-yos yelled “hola!” from their simple homes as we passed. And on one side, the statues from the cemetery – statues of Jesus and nuns and popes – drifted across the backdrop of Mombacho’s cone.

A couple of the original recordings from our bikes:

As I returned to full health, Maeve went under. It’s always easy to blame the food, and identify a specific meal that did the damage. But it’s a dangerous assumption to make. We don’t know what really did it. Maybe it was that meal at that tourist restaurant in the centre, maybe it was a door handle Maeve touched in the hostel. Whatever it was, it went right through her. And the worst thing about it, the reason it’s worth noting for future memories, is that her sickness hit on the only day of the trip that we stayed in a luxury hotel. It was the 40th birthday of Mariëlle, one of the two founders of our soon-to-be new workplace, Buena Vista Surf Club. Her partner Marc had organised for several friends to surprise her in Granada. In the process, he had block-booked their favourite boutique hotel, Tribal, and saved us a room. While I bobbed about in the pool, with a mojito in one hand, Maeve sat in our room, grey as an old bed sheet, waiting for the next sprint to the toilet. 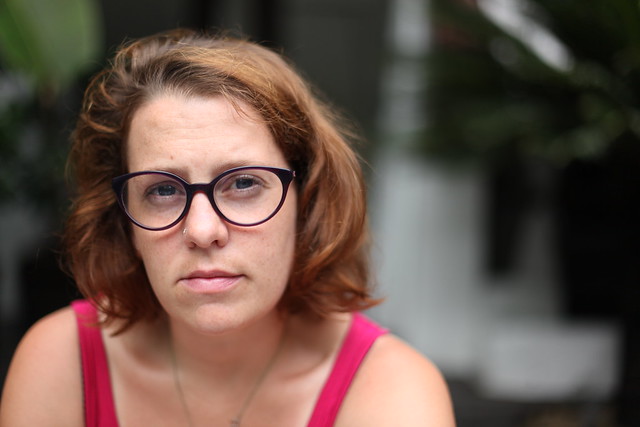 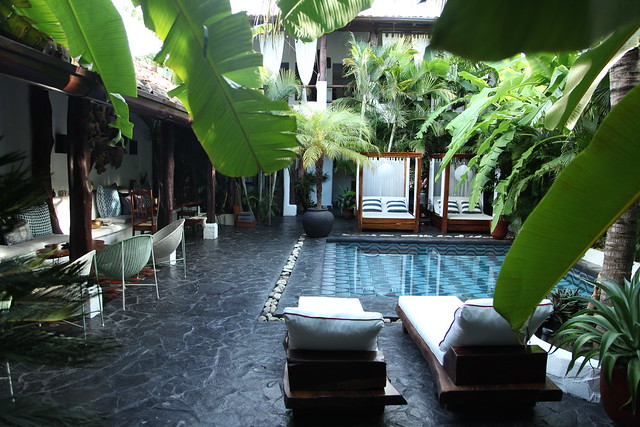 That night, Marc and Mariëlle arrived to a crowd of friends waiting around the pool. We drank cocktails before being picked up by a tractor-driven road train that was designed for kids. It had paintings of Disney characters on the sides of its carriages. It rattled through the city streets, blasting music from huge speakers, making such a racket that car alarms spontaneously sounded from around us. And there, peering out from the squeaky carriages, were people in their thirties and forties, laughing and grinning at the incredulous onlookers. It was a perfectly weird way to start the night, and perfectly contrasted to the delicious meal we then ate at their friend’s restaurant, Espressionista.